Dallas History all wanted to hide, until recently

Downtown Dallas has many locations reflecting both Dallas and Human History. It is a history that continues to expand as brutal public events, forgotten in history, are now being explored and acknowledged.  This post is about 4 places downtown. They are in all stages: developed, being developed, and yet to be developed. They are all within easy walking distance. They are numbered on the satellite view image below.  They reflect us!

Location #1 is the location of the May 27th 1853 hanging of a 53 year old grandmother and slave who is probably an ancestor to hundreds, possibly thousands, now living.  Click here to see more details. In 1853 she was probably either protecting herself, or her child, when she killed the man to whom she had been loaned, with at least one child, by her owner. Slaves were inadequately protected from sexual assault by those in power. While there is no proof, the circumstances point to this too common sexual abuse. She killed her abuser and died on a scaffolding built for her execution by hanging, May 27th, 1853, on the Dallas County Courthouse square. It was witnessed by hundreds who gathered from miles around to see her die, probably the majority of those living in Dallas at the time.  Judge John Reagan, the Confederate Postmaster General for whom a Dallas Elementary school is still named, oversaw the trial. (Click here to see the news that John H. Reagan's name will be removed from the Austin High School given his name beginning with the 2019/20 school year due to his active support for Confederate causes during the Civil War.)

There is no memorial to Jane Elkins anywhere. One is needed to reflect her suffering and the many thousands of those sexually abused in slavery. The public needs to know the horror of slavery, the reason why Confederate statues to those who wanted to keep slavery had to be taken out of places of respect, but not out of our history.  Museums must now struggle with how to most accurately tell this history.

Location #2 is where the July 1860 lynching on the Trinity River of three black men, Patrick Jennings, Samuel Smith, and a man known only as Old Cato, who were accused of burning down the young city on July 8, 1860.  Fortunately, this area, which was along the banks of the Trinity in 1860, was named Martyr's Park in 1991 according to the Dallas Morning News story that you can see by clicking here. Still, no memorial has been created that can be seen and read by the public to know this history.  Click here to see one idea for a memorial that could trace Black History in Dallas from the Civil Rights Act championed by JFK, who was also killed near both locations 1 and 2, and back to the 1853 and 1860 deaths that happened nearby. They were all martyrs in the struggle for justice.

Location #3 is the most completely developed and recorded history.  It is the history surrounding the 1963 assassination of  President John F. Kennedy that happened on Elm Street in front of the then-Texas School Book Depository, now Dallas County Offices.  See number 3 below.

Location # 4 below is the Dallas Holocaust and Human Rights Museum that is now under construction and will be opened 9-17-2019.  It is a powerful addition to Dallas and hopefully will reflect on all Human Rights History, including that history reflected at locations 1 and 2 on this list, as yet still unreflected in the publicly acknowledged history in Dallas with public monuments. 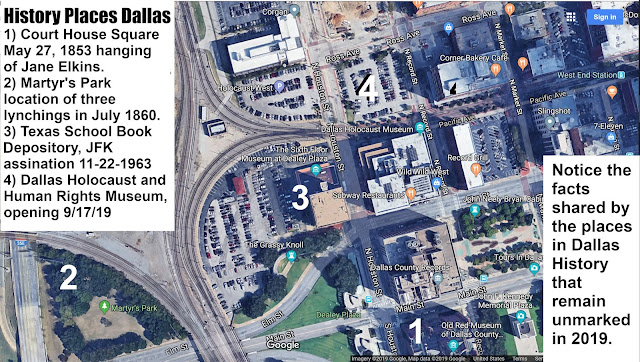 The lack of public monuments reflecting the horror of slavery reflected in number 1 and 2 above is the history "Lost Cause" mythology tried to hide. The Confederate Statues are slowly being moved into storage pending proper display in museums. Dallas must struggle to acknowledge and show respect to those who died due to the abuse of slavery, the slavery that led to the most disastrous war in U.S. History, the Civil War.  We must prepare to accept a much more accurate and complete history.

Those of us who do not already share the DNA of U.S. slaves will someday have descendents and/or relatives who will.  This is the history of all of us.
Posted by Bill Betzen at 2:23 PM