Forging opportunity out of crisis, a letter to Dr. Miguel Cardona, incoming U.S. Secretary of Education

The title of your first presentation today to the American Public as the nominee for Secretary of Education was perfect: "To forge opportunity out of crisis."  That is where we are.  The project I will describe below is an opportunity that is an open-source, very low budget, and volunteer-based project.  It is associated with progress here in Dallas ISD.

I retired as a teacher 9 years ago from Quintanilla Middle School here in Dallas ISD. Quintanilla is a 98% Hispanic and 95% high poverty middle school. 70% of my student’s parents only spoke Spanish.  It was a normal struggling Dallas inner-city middle school in 2005, the year that the School Time Capsule Project started.

This is an open-source, volunteer-ran, almost-no-budget-project that students, parents, and teachers enjoy. It started with 8th graders writing letters to themselves planning their lives 10-years into the future and planning for a 10-year class reunion. It expanded over the years with priceless teacher and parent input into an annual letter-writing by all grades and to parents and relatives writing letters to the students that include priceless family history stories as well as their own dreams for their students.

Academic achievement has soared! Now Quintanilla is one of the highest achieving middle schools among all 33 DISD middle schools. Being one of the four highest poverty middle schools in Dallas ISD has not changed.  It appears we are eliminating poverty as a factor in the achievement gap by injecting goals and the study of family history, a study the entire family is involved with.

I have continued to work as a volunteer School Time Capsule Postmaster for Quintanilla.  We have now had 5 classes return for their 10-year reunions.  We also ask for volunteers at these reunions to come to the school on Career Day and talk about their first decade after 8th grade.  They give recommendations for success.  It appears this focus on the future has contributed to the constantly higher academic success.

The annual writing project now involves many schools and includes grades from 3rd through 12th grade.  Only 8th grade and 12th grade letters are focused 10-years into the future and remain in the vault a decade. All other letters are returned the following year by volunteer Time Capsule Postmasters like me.

Many positive changes happened since 2005 to our students, not the least of which is that students begin to see the power of writing.  Negative behaviors were lessened. Graduation rates went from 33% to near 90%.

The costs involved paper, copying, envelopes, and postage to connect with former students for their 10-year reunions. We have been able to secure the 700-pound vaults we use from Costco delivered, usually for $1,000 or less.  (See photo for vault we had to buy to replace the first one at Quintanilla. It became too small for the large number of letters.)

I would be honored to answer any questions you or your staff may have.  This is an open-source project free for any school to use.

The LULAC National Education Service Center here in Dallas has been the major supporter for this project for the past 9 years.  I am copying this letter to the Director of that office, Ray de los Santos.

Thank you for taking on the monumental task of U.S. Secretary of Education.  I hope the School Time Capsule Project can make your job more rewarding.  It involves writing issues all teachers know and should make their work easier, but they must have School Time Capsule Postmaster volunteers to support them and not add to their already heavy workloads.

I will be in the crowd if you ever visit Dallas, 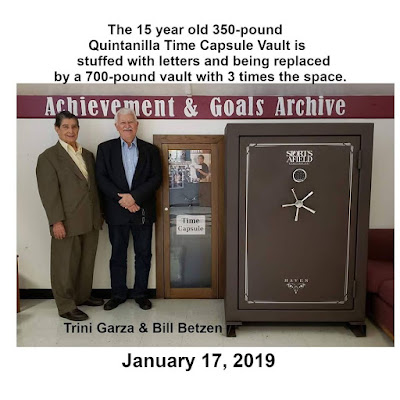 Posted by Bill Betzen at 3:18 PM No comments: