Cost for failure to admit cause for Civil War

The Sons of Confederate Veterans are having their national convention this week in Richardson, an excellent opportunity for exploring U.S. History.

Most Confederate Monuments were erected, and Confederate names given to buildings, over 60 years after the Civil War.

More significantly, the monuments and Confederate names only began to appear in greater numbers a decade after the founding of the National Association for the Advancement of Colored People.

It would suggest that the naming and raising of monuments was associated with active work to defend “separate but equal” and segregation.  It ended by 1960 with few if any such monuments, or Confederate names given to buildings, after the end of the 1950’s. Even though the legal foundation was laid with the Brown v Board of Education 20 years earlier, the last major city to legally integrate all schools was Dallas in 1976. The reason for Confederate names and monuments was gone long before 1976, but the failure to discuss and admit the reason for the Civil War has continued to this day at great cost.

The attempt to create a sanitized history of the motivation behind the Civil War was universal across the south.  The large majority of slaves were owned by less than 2% of the wealthiest citizens of the south who were the major architects of the Civil War. That justification for the war disappeared after the war. “States’ Rights” were fabricated as the central cause. This happened in spite of the ample historical documentation, most recently recorded in the 2015 book “The Myth of the Lost Cause: Why the South Fought the Civil War and Why the North Won,” by Edward H. Bonekemper III.

There is little doubt that this sudden appearance of Confederate names and monuments across the south, especially during the final 30 years before “separate but equal” was declared illegal, was only another method used by those fighting to keep “separate but equal” required by law. What else would explain this 30-year focus on the resurrection of Confederate names and memorials, then suddenly it was stopped?

The Sons of Confederate Veterans Convention this week is an opportunity to revisit critical U.S. History.  If there is agreement as to the true main causes of the Civil War, we will have taken a first step toward a peaceful resolution of the agony now being faced in our streets.  It is no accident that those who are fighting against groups such as Black Lives Matter are also groups who erect monuments like this: 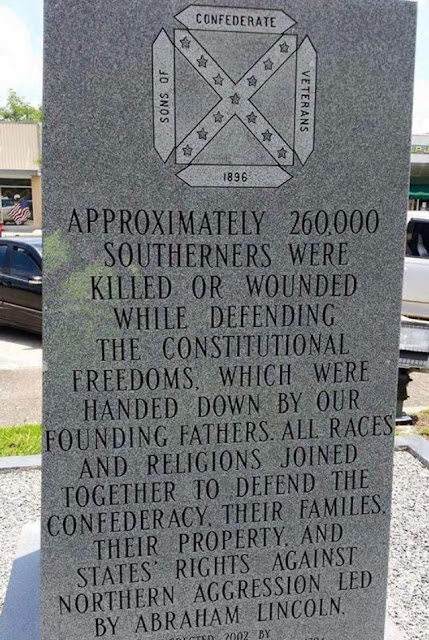 Here is a review of “The Myth of the Lost Cause” that helps shed light on this history that is part of today’s battle.

A July 5th Washington Post article this year quoted Patricia Hardy, a member of the State Board of Education in Texas, as stating that slavery was a “side issue to the Civil War. There would be those who would say the reason for the Civil War was over slavery. No. It was over states’ rights.”

Ms. Hardy should read Ed Bonekemper’s latest book, "The Myth of the Lost Cause." In this, his sixth Civil War book, which is perhaps his finest, Mr. Bonekemper uses his gifts as both an historian and a lawyer to shred revisionist history that has tried to sanitize the reasons Southern states seceded from the Union. Mr. Bonekemper’s research is thorough; his arguments are compelling. The high percentage of slaves compared with the total population in the seceding states (57 percent in South Carolina) and the high percentage of slave-holding families in those states (49 percent in Mississippi) are strong indicators of the importance of slavery in the decisions of these states to leave the Union. The reader is provided with the actual language from the declarations at the state secession conventions. Mississippi got right to the point: “Our position is thoroughly identified with the institution of slavery.” At that time, the issue of states’ rights was not on the agenda of the seceding states; Southerners were dissatisfied instead with the Northern exercise of their states’ rights – failing to return fugitive slaves in accordance with the Constitution and Federal law! Additionally, the South’s rejection of the use of slaves as soldiers and the South’s failure to promise to end slavery to gain the diplomatic support of Britain and France demonstrated that the independence of the Confederacy was a lessor priority than the preservation of slavery. It is clear that the only states’ right the Southern states were interested in was the right to maintain slavery.

I agree with one reviewer’s assessment that the first 95 pages alone are worth the price of the book. After refuting the states’ rights myth, the author refutes other popularly held beliefs: (1) the Confederacy had no chance to win the war; (2) Robert E. Lee was one of history’s greatest generals; (3) General Longstreet, not Lee, was responsible for the Confederacy’s loss at Gettysburg; (4) Ulysses S. Grant was a “butcher” who won the war with superior numbers and brutality; and (5) the North won because it waged total war against the South. Mr. Bonekemper explains that the allegation that the North won by waging total war is a myth, because it fails to distinguish between “hard war,” which involves the destruction of enemy armies and property, and “total war,” which adds the deliberate and systematic killing and rape of civilians. As the author demonstrates, unlimited, large-scale attacks on civilians are absent from the Civil War.

There are two reviewers who inexplicably gave this extraordinary book only one star. One reviewer said that the book was intentionally deceptive, but he failed to say in what way. He further claimed that the author omitted important facts, but he failed to clarify what these were. It is questionable whether this reviewer even read the book, and I find his unsupported conclusions to be a disservice to potential readers. Although the second one-star reviewer did provide specific objections, they were either irrelevant to the author’s points or they were factually incorrect. The reviewer states that only 10 percent of whites were wealthy enough to own slaves, even though a chart is provided showing that the percentage of slave-owning families in the 11 states that seceded ranged from 25 to 49, with the average being 31. Moreover, Mr. Bonekemper points out that fear of Negro equality by Southern whites who were not slave owners helped to reinforce the institution of slavery. This is an exceptional book, well written and meticulously researched, and should be read by all who want to truly understand the history of the Civil War. I challenge the State Board of Education in Texas it to make "The Myth of the Lost Cause" part of its curriculum.

Posted by Bill Betzen at 9:20 AM No comments: