Following an open records request earlier this school year I received the average teacher salary per school for the three years 2015/16, 2016/17, and 2017/18.  This salary data does not support the claim that more resources are going to the more needy students. The opposite is true!
In 2015/16 there were 19 schools with economically disabled student percentages below 70%. The difference between those 19 schools and the remaining 216 with higher levels of poverty was $423 in 2015/16. By 2017/18, under TEI, this difference had exploded over 9-fold to $3,953!
Obviously teacher salaries are growning much faster in the schools with below 70% of students living in poverty, and growing more slowly in the most poverty stricken schools.
Please join with me in studying the average teacher salaries in each school. The new data for 2018/19 should be available by August.
More details about this study, which includes a link to a Googledocs copy of the three years of salary data used as received from Dallas ISD, can be found at
http://billbetzen.blogspot.com/2018/11/dallas-isd-teacher-excellence.html.
Another study on this data was done focusing on the only three schools (Lakewood and Mockingbird Elementary, and Travis Middle School) with over 50% White-non-Hispanic enrollment. The average teacher salary in these three schools had gone up from 2015/16 to 2017/18 an average of $7,771.  This has resulted in average teacher salaries that are over $9,500 higher than the average of all the other schools in DISD.  The average school in DISD only had an average teacher salary increase 2015/16 to 2017/18 of $3,144.
How can DISD claim that they are focusing more resources on the most needy students?
Posted by Bill Betzen at 4:24 PM No comments:

The first Dallas Black high school was established in 1892.  It was rebuilt, moved, and eventially the building we know today as Booker T. Washington was constructed in 1922 with the name changed from the Dallas Colored High School to Booker T. Washington High School.  It remained as a segregated Black school until being closed in 1969. The Class of 1969 just celebrate the graduation they were denied at Booker T.

In 1976 in was reopened as the Booker T. Washington Arts Magnet (BTW) and began the evolution into becoming one of the best high schools in the nation.  Due to its popularity the admission process has often been in the Dallas news. The debates over the years have mostly been on how this historically segregated Black high school has become the most White high school in DISD. The good news is that by one measure, the current numbers show progress over the past 5 years in re-integration. This is that progress: 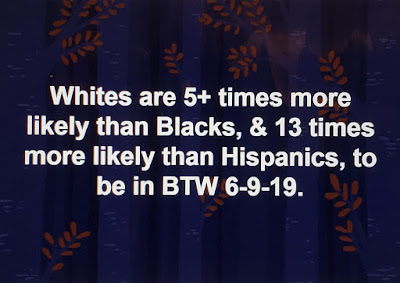 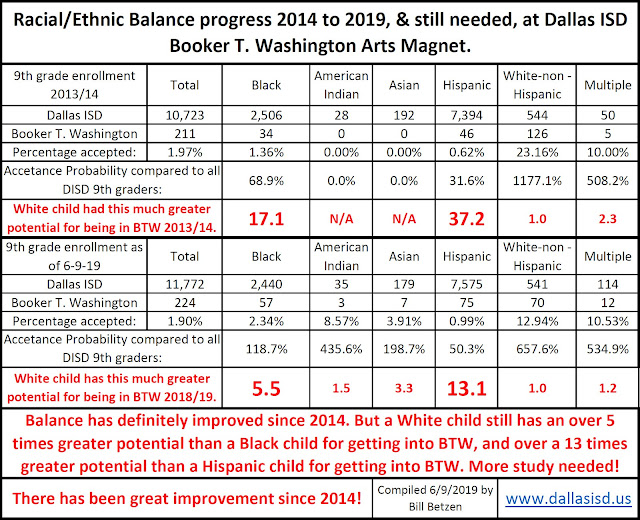 Dallas ISD is making significant progress but still has a very long way to go for equity.

Suburban student submitting false documents to get into BTW was reported on last week by the Dallas Morning News: "How Dallas ISD plans to stop the suburban cheaters stealing admission slots at prestigious Booker T."

While I have not seen the demographic profile, it is safe to say that the suburban students do not help BTW to be more inclusive.  That is another way wherein slots at BTW are being taken from DISD minority students, 95% of the students within Dallas ISD.

Such lack of equity at Booker T. Washington gives several ways a civil rights lawsuit may be directed.  The failure of DISD to prepare their own pk-8 students to become highly competative candidates for BTW needs to be explored in the formation of such a complaint.

Sadly there are many examples of a lack of equity within Dallas ISD, like the average salary paid at the three 50%+ White schools: http://billbetzen.blogspot.com/2019/02/higher-dallas-isd-teacher-salaries-are.html

-------------- Second Update made on 6-13-19 -------------------
This article in the NY Post has one of the more complete reports on this event that I have seen. It linked to the 33 second clip that Rooha had posted on Twitter which account included this text from Rooha explaining what happened:https://nypost.com/2019/06/12/district-apologizes-for-cutting-off-valedictorian-who-mentioned-trayvon-martin-tamir-rice/ In explaining why the names could not be given a teachers told Rooha that Whites are discriminated against and her naming of Black victims of violence would incite more such discrimination. 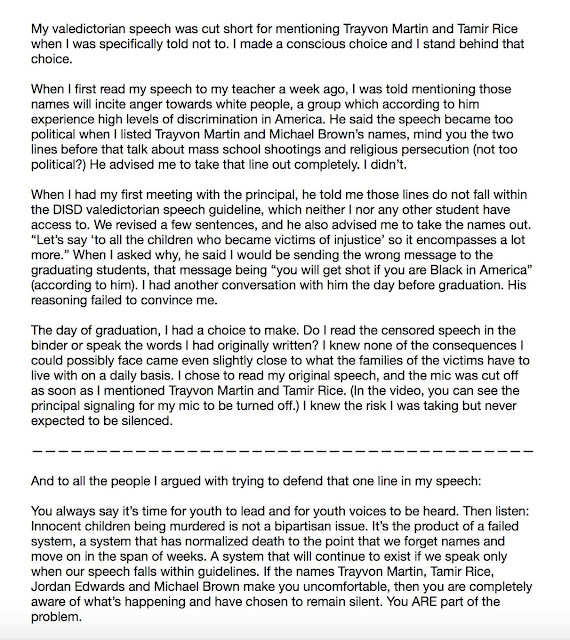 We are very proud of you Rooha! The conversation you requested should happen. The public is learning some necessary and valuable lessons due to your bravery.

On 6-11-19, it was great to hear that Dallas ISD has apologised to Rooha Haghar for all the right reasons! Congratualions Rooha! This embarassment by Dallas ISD has helped thousands more hear your well said words! I still urge you to give your talk in front of the DISD Board so the main points fit into the three minute limitation. You can do it! Sign up for the 6/27/19 meeting! We Dallas ISD supporters (i.e. supporters of DISD when they truly supports students) need to stand and cheer your success! Please let us know if you will speak on 6/27/19. https://www.dallasnews.com/news/education/2019/06/11/dallas-isd-apologizes-grad-whose-speech-cut-mentioned-victims-injustice


It has been posted that this was the rest of her talk that she was unable to give:
""And while we are receiving our diplomas tonight and moving on to bigger things, they were students who were robbed of this opportunity.


To all the kids who got left behind because their education educational needs cannot be met,To the students that had to drop out to work and help their families financially,
To the Baha’i youth of Iran who are denied access to her education by the government some serving time in prison for wanting to teach,
To the kids that were murdered in senseless mass shootings,
To Trayvon Martin, Tamir Rice and all the other children who became victims of injustice,
To the kids across the globe affected by war, famine, persecution, and child labor who have lost years of education due to hunger displacement lack of finances and lack of educational resources,
I’m sorry.
You see tonight is a celebration of our achievements, yes, but it is also a reminder of all the work that needs to be done. And as much as I hate to say this, “Class of 2019, we just might be the future.” So no matter which path you take in life, where you end up in the next decade, remember you have an obligation to community, and the world at large.”

Here is another news article on freedom of speech denied the Conrad Valedictorian, Rooha Haghar, on the day of her graduation. It includes a video of the event which makes what happened clear: https://www.nbcnews.com/news/us-news/valedictorian-says-her-microphone-was-cut-after-she-mentioned-trayvon-n1014631?   Trustee Micciche is setting to the left of the principal who signals the microphone to be turned off.  I wonder what Trustee Micciche's opinion is.

If Dallas ISD has not made a public response to this anti-critical-thinking action by a DISD Principal, everyone should call 972-925-3720 by 6/26/19 to sign up to speak at the next days meeting.  My that time my planned testimony will be posted at www.dallasisd.us.
. 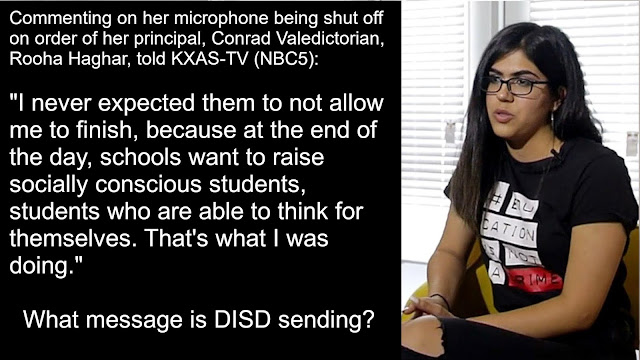 Posted by Bill Betzen at 6:24 PM No comments: