This is an email delivered to Dallas Mayor Eric Johnson and the City Council on 5/18/22 after my presentation on these same facts.  If  Map 41B is approved by the Council, is there any real alternative other than filing a federal voting rights lawsuit?
===================

Honorable Mayor Johnson and members of the Dallas City Council,
Tomorrow I will spend three minutes presenting critical data about the City Council Redistricting Map 41B that you will be formally receiving at the same meeting.
I was very involved in both the 2011 City Council Redistricting and again this year.  Consequently, I was able to understand more of the history of the injustices against Dallas minority communities over the past 31 years of redistricting.
Cracking is the breaking up of racial and ethnic groups into different districts so their numbers are small enough that they are never able to elect a representative from their group without significant help and approval from the majority group in that district, usually White voters.   Cracking has been one of the main methods used in Dallas against minorities ever since Federal Courts ordered 14-single member districts to be established. It has been used to lessen minority power in Dallas. At times it is used to increase tensions between racial and ethnic groups. Such usage continues until now and will continue unless major amendments are made to the redistricting map you will formally begin studying tomorrow.
Here is a map of Dallas and the 5 minority communities that have remained cracked and whose voters are unable to elect councilpersons who look like them since 1991. 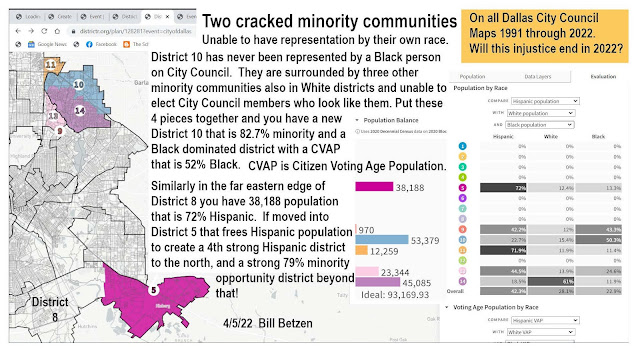 Are you willing to end the 31 years of injustice to these 5 cracked minority communities in 2022? Map COD-040, which has been amended into the People’s Map, does that, creating 9 winnable minority districts in the process.  The amendments done to the People’s Map were aimed at incorporating all the improvements made with 41B, improvements that did not hinder minority representation or compactness. The People’s Map has an average perimeter of 42.14 miles, almost a full mile less than the 43.12-mile average perimeter of Map 41B you will study today.  More miles of boundary means that more communities are separated by City Council District boundaries.
Here are the maps done by the consultants hired by Dallas, but I modified the coloration in Map 41B to reflect that Districts 1 and 2 were not winnable by Hispanic majorities based on 10 years of election history in District 1. The lower Hispanic VAP and CVAP numbers with the new 41B District 2  made it unwinnable without White support.  The People’s map required no such modifications due to higher Hispanic District 2 VAP numbers and due to the unification of the core of Kessler Park preservationists with District 14 preservationists restoring District 1 to being a winnable Hispanic District.

Here are the Voting Age Population numbers for both maps: 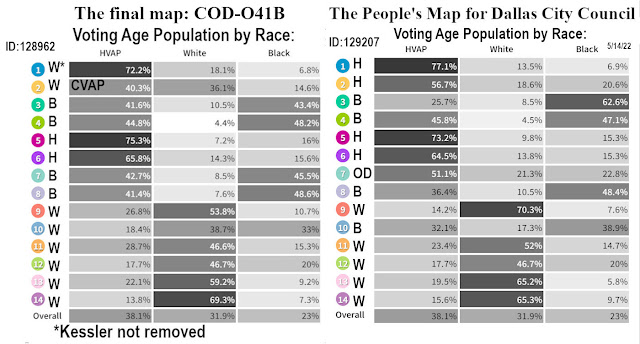 If anyone studies the data and maps above and contrasts them with the 2011 map as well, they quickly see that 41B is the most racially discriminatory map in 20 years for the Dallas City Council! It maintains cracking done in the 1991 map and maintained ever since!
We are on the minority side in this battle, a side made up of Black, Hispanic, and White neighbors who all want equitable representation on the Dallas City Council. We want 9 winnable minority districts among the 14 city council districts: 4 Hispanic, 4 Black, and a 9th strong minority opportunity district that is 79% minority Voting Age Population (VAP).  We support the People’s Map that easily achieves 9 winnable minority districts and does it with the most compact map.The Redistricting Commission suffered lost time due to poorly directed debates about the Citizen Voting Age Population and the refusal of Dallas to make CVAP data known to the public as they made maps. Thus, a very unrealistic view of Hispanic winnability was allowed.  It obviously could not be used to populate maps, but to judge the winnability of a district it was necessary!  Why was it missing? DISD used it publicly to compare maps.Here is the CVAP data on both Map 41B and the People’s Map to verify winnability judgments made: 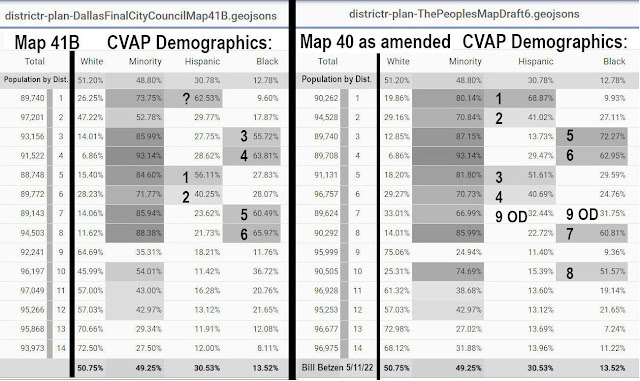 The People’s Map eliminates known cracking and, with additional improvements, creates 9 strongly winnable minority City Council Districts. In doing this we have the most equitable and compact Dallas City Council Map in Dallas History!
Please amend the People’s Map to Map 41B for the people of Dallas!
Bill Betzen

Posted by Bill Betzen at 7:50 PM No comments: