"Jane, a slave, AKA Jane Elkins, was the first female to be legally hanged in the state of Texas."

Many now in Dallas may be living descendants of Jane Elkins.

Why do we want to honor men who wanted to keep such an abusive system that led to the victims of the system being murdered such as 53-year-old Jane Elkins on May 27, 1853, in Dallas?  She was hung by the Dallas 1853 legal system for killing a widower to whom she had been hired out by her owner to watch his 2 children. Slave rape was too common. It was not allowed as a defense if the rape victim attempted to defend themselves with similar violence. When asked to make a statement at her trial by Judge John H. Reagan, she remained quiet.  She knew what she was facing.

Judge John H. Reagan did not allow her rights as we see them today. Maybe the DISD school with his name, on 201 North Adams in North Oak Cliff, four miles from where she was hung, will someday have Jane Elkin's name as an acknowledgment of the horror of slavery that John H. Reagan saw as normal. John H. Reagan was the Postmaster-General for the Confederacy. In 2018 when many Confederate Names were removed from Dallas schools, for some reason, the John H. Reagan name was not on the list and not changed as it was in other Texas school districts: https://oakcliff.advocatemag.com/2018/02/john-h-reagan-name-removed-austin-remains-oak-cliff/

It is very possible Jane Elkins killed Mr. Wisdom due to rape, or wanted to protect her children and/or grandchildren from such treatment. She knew she would die. This may have been her sacrifice for her children.

Slavery did not allow rape as a defense.  Over 2 years after the hanging of Jane Elkins, in Missouri a lawyer tried such a defense for his 19-year-old client, Celia, who had been raped since the age of 14 by her owner.  She had given birth to two children, apparently his. When she demanded it stop, he went to rape her again.  She killed him.  The facts of the case were not the issue, but the Missouri Supreme Court would not allow such a defense.  Celia was hung on December 21, 1855, after giving birth to a third child, a stillbirth, in jail.  See: https://www.famous-trials.com/celia/181-chronology

Dallas should put out a challenge to the national artist community to submit written plans, including drawings, planning the creation of a greater-than-lifesize bronze statue depicting the 1853 hanging of Jane Elkins on the Dallas Courthouse Square.

These proposals would be judged to win one of maybe 4 prizes of $1,000 to $5,000 to use in creating small scale models of their proposed bronze sculptures. Then the Dallas community and leaders would select the winner. Fundraising for the statue(s) would begin if one proposal is judged as acceptable to be placed on the square where the hanging of Jane Elkins happened.

One of the most horrendous truths of slavery that Confederate statues tried to hide was the too common sexual abuse of slaves. The hanging of Jane Elkins in Dallas County Courthouse Square points to such abuse.

The Robert E. Lee statue could be placed together with the Jane Elkin's statue bring proposed, but dominating the scene as a reflection of the truth.  The Lee Statue would point to "Lost Cause" lies that followed since the Civil War so as to allow segregation and other abuses, too common in Dallas, to continue. (Robert E. Lee is documented as not wanting any statues, such as this one of him, being created. Sadly he could not control what was going to happen in the future with his image.)

To provide more detail the following pages are from "Hangings and Lynchings in Dallas County, Texas: 1853 to 1920 Paperback – January 22, 2016  by Terry Baker (Author)" (The link goes to Amazon.) 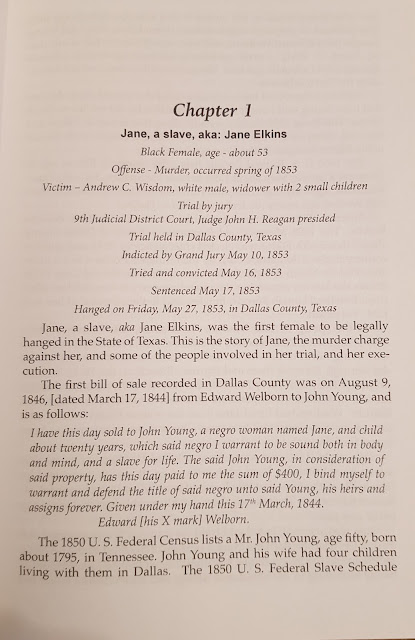 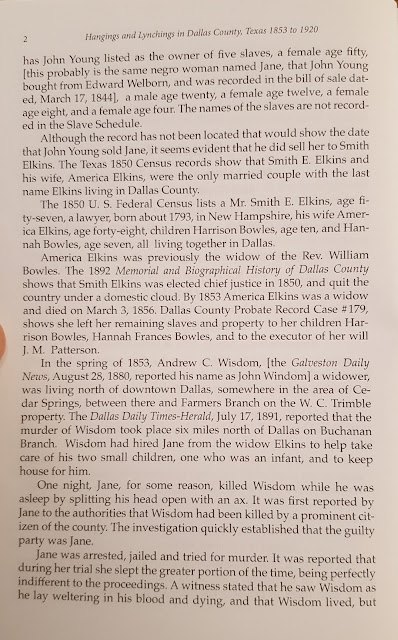 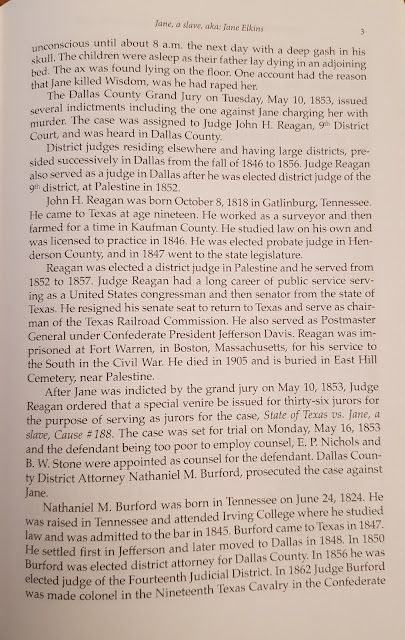 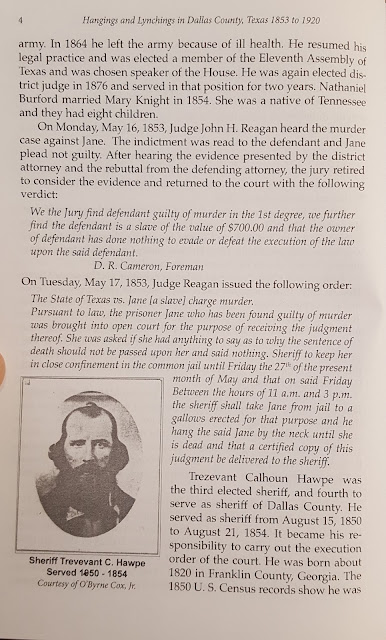 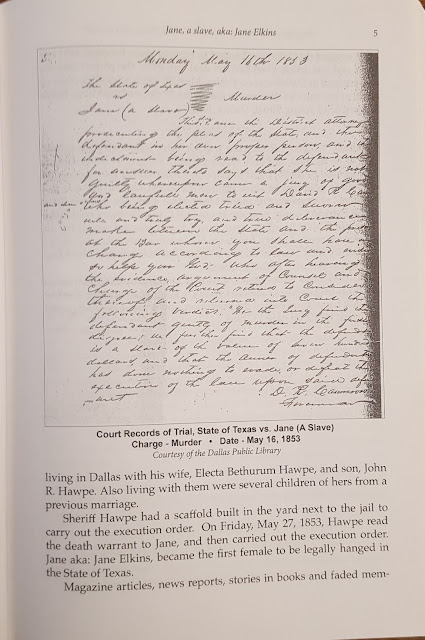 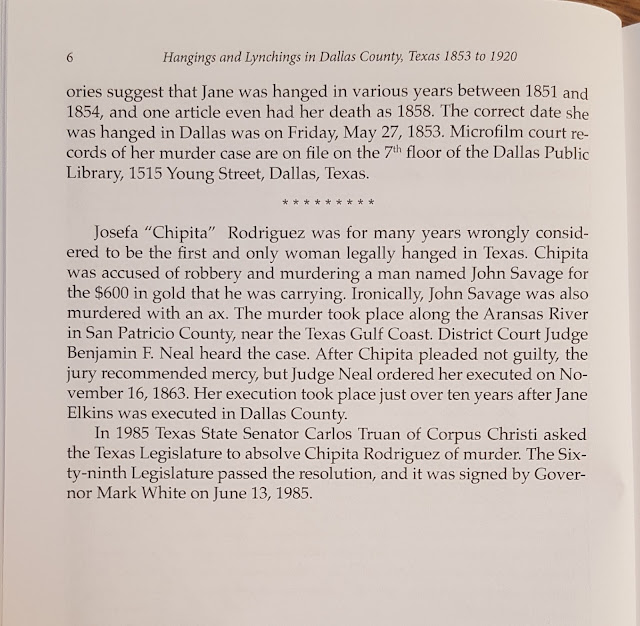 This weekend 9-30-18 Jane Elkin's story was mentioned in the Dallas Morning News complete with more links to documentation and apparent verification that she was a rape victim who took the law into her own hands:  https://www.dallasnews.com/opinion/commentary/2018/09/28/dallas-must-remember-forgotten-former-enslaved-people-buried-near-bachman-lake

A play about Jane Elkins was done in 2014, but spoke of her as a "girl."  See  http://www.anyikaherod.com/the-ballad-of-jane-elkins/

Other records are at http://www.humanrightsdallasmaps.com/items/show/2 .  However on this page is this photo below indicating it was the courthouse at which she was killed.  That is not correct.  In 1852 Dallas County probably had less than 1,000 population and could never have afforded a two story couthouse.  (See
https://texasalmanac.com/sites/default/files/images/CityPopHist%20web.pdf where a 1858 census recorded 433 in Dallas.) This image appears to be the 1873 image of the Courthouse that was left without a roof and onlywalls for over 2 years until Dallas could secure money from the Texas Legislature to finish the building.  See http://billbetzen.blogspot.com/2018/11/kennedy-memorial-mystery-in-1872-dallas.html