Struggle to acknowledge history of slavery and Civil War

Today in the Dallas Morning News there was a misnamed front page article titled "Dallas May Send Lee Statue to FW."  The Texas Civil War Museum is located in White Settlement, not in Fort Worth.  The address is 760 Jim Wright Fwy, White Settlement, TX 76108.  In at least one online location it is listed in Fort Worth which is an error.

Regarding history, this town of White Settlement was originally named due to having "White" settlers to separate it from the Native American settlement closer to where downtown Fort Worth is currently located.  In 2005 they voted to change the name but over 90% of voters were against such a change.

This museum is attempting to secure the Robert E. Lee Statue which request will be considered along with others on 3-21-18 at the Dallas City Council meeting.  See the above mentioned article at https://www.dallasnews.com/news/dallas-city-council/2018/03/16/dallas-may-send-robert-e-lee-fort-worth-keep-confederate-war-memorial

If you agree that the Robert E. Lee Statue is a powerful symbol of Human Rights History in Dallas, and you do not want it in a museum outside of Dallas, join us in City Hall Wednesday morning at 9 a.m..   Circulate this notice: 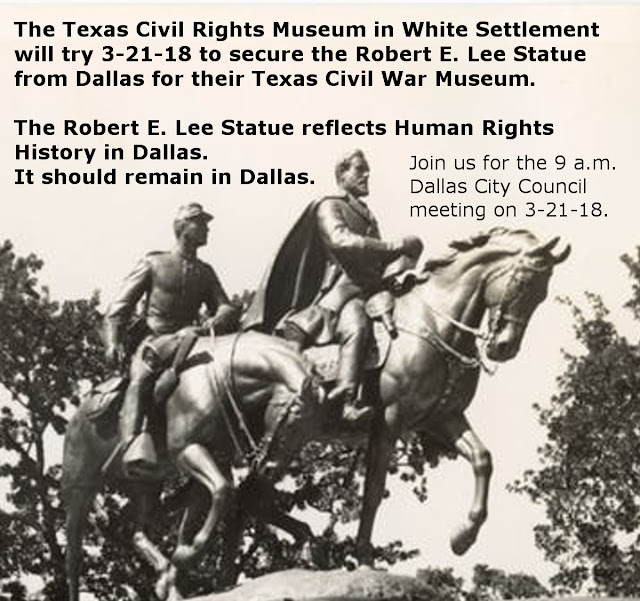