The recent article titled "Dallas ISD predicted to lose 5,000 students in next 10 years, demographer tells trustees" makes a major error in the statement: "a 5,000-student downturn that would be unprecedented for DISD."


Sadly there one year in DISD History when the district lost over 9,000 students in just one year!
During the explosion of White Flight in DISD the loss was over 5,000 White students for each of five different years from 1969 to 1977. This is well documented in both DISD records and in newspaper articles at the time. The data is collected at http://billbetzen.blogspot.com/…/dallas-white-flight-dates-… .
The record all time high DISD enrollment was in 1969/70 of 173,799 students.  DISD Administration was optimistic, totally out of touch with the Dallas community, and projected continued record growth and of 180,000 the next year.  That did not happen! The enrollment for 1970-1971 dropped by 9,073 students to only 164,726! The Dallas ISD enrollment loss from 1969/70 to 1970/71 is the greatest single year of total enrollment loss in DISD History! It could be called the year White Flight exploded.  By 1977 total DISD enrollment had fallen to 139,090! 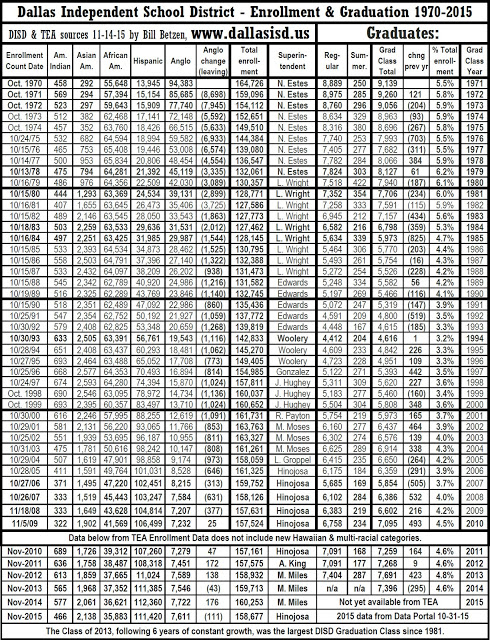 Hopefully Dallas ISD will never come close to another 5,000 student loss in only one year again. The last of the five 5,000+ student losses was the 1976/77 school year. Sadly DISD enrollment losses of usually thousands a year continued until 1984 when enrollment fell to the lowest level in the past 60 years of only 127,462 students. Then a slow climb began as more minority students joined DISD than were lost in the White Flight that continued until 2010.
Posted by Bill Betzen at 7:40 AM