Testimony being given at monthly Dallas ISD Board Meeting on 11-21-19: 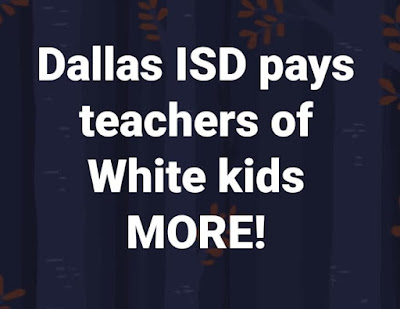 Data clearly shows that Dallas ISD pays teachers of more wealthy & White students significantly higher annual salaries than all other schools! This difference has increased significantly since the start of TEI, the teacher value-added evaluation method called Teacher Excellence Initiative.
Following an open records request, the average teacher salary per DISD school for the three years 2015/16, 2016/17, and 2017/18 was received. (It is linked below in Googledocs.)
In 2015/16 there were 19 schools with economically disabled student percentages below 70%. The difference between those 19 schools and the remaining 216 with higher levels of poverty was $423 in 2015/16.  By 2017/18, after several years of TEI, this difference had exploded over 9-fold to $3,953!
Obviously teacher salaries are growing much faster in the schools with below 70% of students living in poverty, and growing more slowly in the most poverty stricken schools.


(Please join with me in studying the average teacher salaries in each school. The new data for 2018/19 was available by August. I simply have not had time to check. - BB)

Tragically, this study shows that the school with a significantly higher School Effectiveness Indices (SEI) had salary increases that were half those of the mostly White schools. 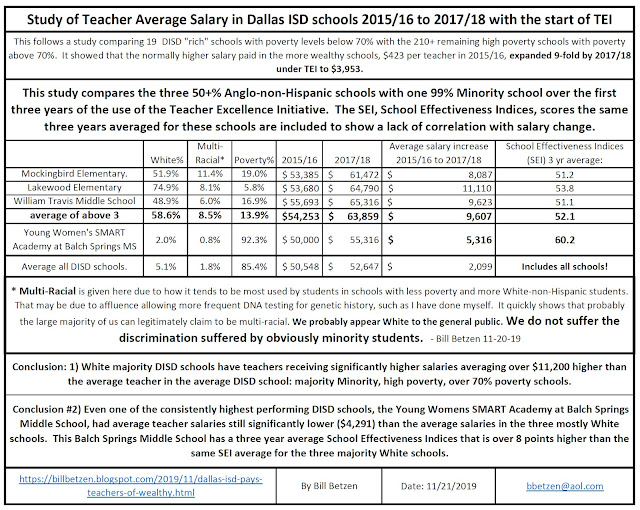 How can DISD claim that they are focusing more resources on the most needy students?
Posted by Bill Betzen at 4:17 PM