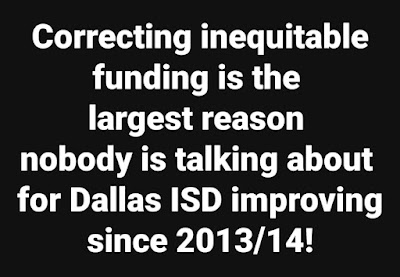 The erroneous 10-24-19 Dallas Morning News editorial ignored much of DISD History. The 43 Improvement Required (IR or failing) schools in 2013/14 were high poverty & suffered from under-funding. In 2013/14 they were receiving $887 less Regular Funding per student than the ten schools with 50% or more non-poverty (more White) students.  Here is the chart with the average Regular Funding per the more wealthy (White) schools:

Here is a chart with the higher poverty schools that all went IR or failing: 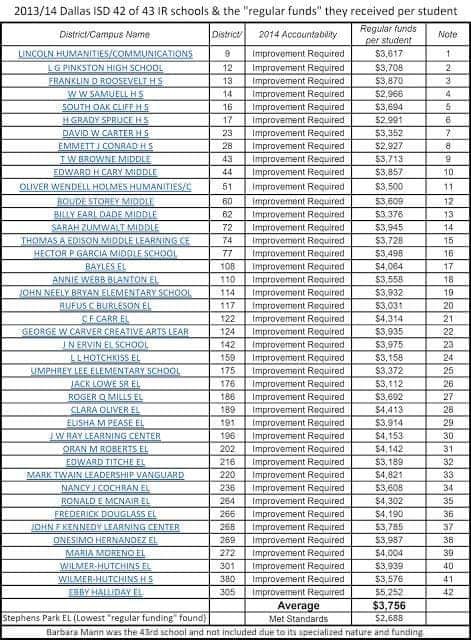 By 2017/18 there were only 4 IR schools. There is also a more equitable funding district-wide.


Obviously there are many additional reasons for this progress, but greater equity is the largest one that nobody is talking about, and it is still not fully corrected. These two charts point to the 2013/14 funding inequity.

The chart below points to the phenomenal progress made in Dallas ISD leading up to 2013.  This progress turned around dramatically in 2013/14 due to new leadership and the massive supplantation of need-based funding, taking Regular Funding away from high need, high poverty schools by a new superintendent. 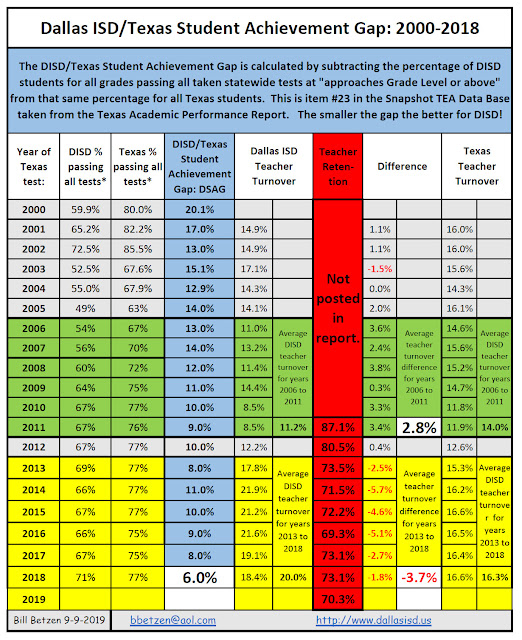 It is not an accident that when a federal complaint about this 2013/14 supplantation was filed by 15 Dallas ISD residents, and covered heavily on the evening Channel 8 News the evening of 6-3-19, that Superintendent Mike Miles announced his resignation within 3 weeks, on 6-23-19.

A letter from the Civil Rights Division of the U.S. Department of Education (DOE) dated September 22, 2017 documents the 15 allegations, none of which were invalidated as the investigation was closed by new DOE leadership. That 9 page letter is posted at  http://billbetzen.blogspot.com/2018/04/government-response-to-4-21-15.html .