Some signs of gerrymandered Texas House, Senate, and Congressional Districts

Using demographic profiles to identify gerrymandering in any set of districts can be done easily.  Simply create a spreadsheet with the demographic profile for each planned district for the area to be redistricted. For the sake of simplicity dividing districts into White or Anglo-Non-Hispanic and Minority is the most rapid way in Texas to identify gerrymandering.  Here are the qualities to look for:

2) Is there a gap in White Districts in the 30% to near 50% majority, while that same maximized loss range that is filled with Minority Majority Districts?

3) In the Maximumized Win Range above 50% to 70% dominated by White Percentages in that range, but there are almost no Minority Districts with those valuable percentages?

These three questions help to outline maps that are gerrymandered.  These patterns NEVER happen by accident. 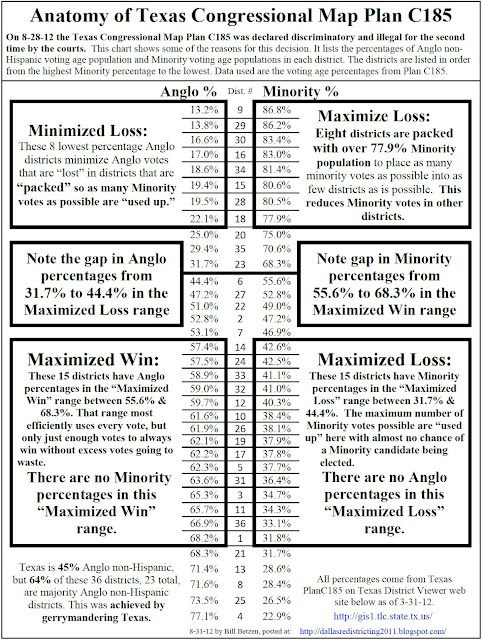