Single Spreadsheet Transparency will continue public education improvement in Dallas and every city! 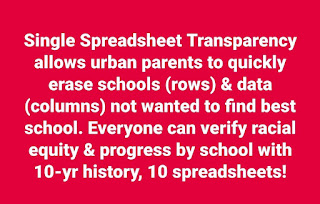 Single Spreadsheet Transparency for Dallas ISD, and all districts, is the foundation that is lacking for a true public education revolution in Texas.
In DISD it would simply expand the School Information File found under "Resources" in the current DISD Data Portal. It would add columns of data to the 45 columns of data already present for the 261 schools and academies, one school or academy in each spreadsheet row. Single Spreadsheet Transparency adds columns with the most commonly requested and useful data, already public, but fragmented into charts in multiple locations online. Parents do not have hours needed to pull all such fragmented data together when they have a question comparing schools.


Any person with a middle school understanding of spreadsheets will be able to erase the columns of data and rows of schools they are not interested in within seconds in their downloaded spreadsheet. They could quickly drill down to the information they are concerned about. DISD enrollment would grow!


With all the most basic data for every school in one spreadsheet row, with the entire district in one spreadsheet, DISD will enjoy a revolution in public transparency! With the continued confidence of DISD Administration, and DISD's willingness to constantly improve, the foundation for a true national public education revolution will be laid! The public will become involved as drivers in educational reform as never before.
The columns of data to be added would include the 32 funding sources per student for each school from the PEIMS Financial Reports online so advocates can quickly verify funding equity. Additional columns would include average teacher salary in each school for the current year, and the previous 5 years, average teacher tenure and turnover, as well as multiple additional variables, available online but in multiple locations! It is anticipated about 200 columns of data will need to be added to achieve true Single Spreadsheet Transparency.
Each school year that year's data will be added to a new spreadsheet online as it is collected. At the end of the year, when all data is finalized, that year's spreadsheet will be finalized and archived to join the 10-year archive of such data that the public needs to be able to study for patterns.
Spreadsheets for the past decade will be created following the decided upon format so a full decade of history, plus one, will be immediately available to the public. What could lead to stronger public confidence than such ultimate transparency? Without such transparency, or a resistance to such transparency, it appears DISD may have something to hide.
There are probable over a dozen staff in DISD who could create all 10 spreadsheets for each year of the past decade within a week.
Yes, problems will be exposed. But as long as they are admitted and corrected, DISD will be on the way to being the greatest urban school district in the nation! We already have much to be proud of! Now we should have the confidence to be this transparent.
Posted by Bill Betzen at 7:02 AM