2012 to 2019 the 36 established Dallas ISD high schools improved wonderfully! These three charts are a study based on the percentage of students in each school who met TEA standards each year in each school from 2012 to 2019. There are three charts with the same information in each chart but sorted by different data. All charts include the percentages for Highland Park High School, the most affluent high school in all of Dallas County. It is also the only high school in Dallas County with no children living in poverty. It is included to give some comparison as to the poverty gaps that are being made smaller by our public schools! In 2012 only 2 DISD schools had higher percentages of students meeting standard than Highland Park High School. By 2019 that number had grown from 2 to 9 schools. They also did it with average poverty rates above 67%.
The first chart is of Dallas ISD High Schools ordered by improvement 2012 to 2019. The second chart is ordered by improvement in 2019 alone. The third chart is sorted from the largest enrollment high school down to smallest.
Schools in the top 12 schools in both of the first two lists are the best of the best, unless they are like Townview Science and Engineering that was already at 93% in 2012, definitely the best! Can't go higher than 100%, so it is lower on the second list.
Gilliam and Garza did exceptionally well in both Top Twelve lists! They also have the highest poverty levels among the schools on both lists. Such success must spread!
This second list is ordered by the 2019 achievement, a more absolute standing of the schools currently.  In 2019 Dallas ISD had 9 high schools with higher percentages of students meeting standards than Highland Park High School. In 2012 only two Dallas ISD high schools had higher percentages than Highland Park.
This third and final list is in order by 2019 student enrollment: 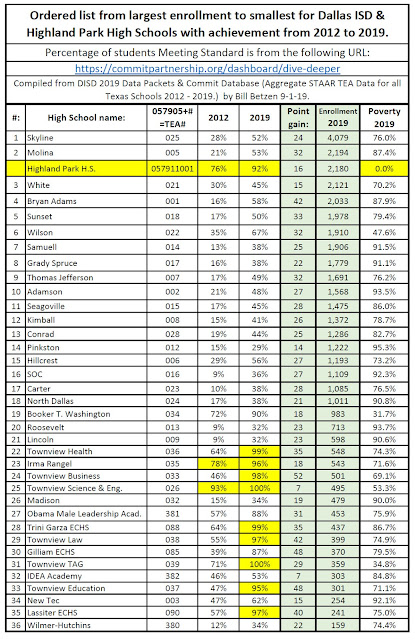 There are many ways to look at this data.  This is only the tip of the iceberg, but it indicates tremendous progress by Dallas ISD!