The most gerrymandered Dallas City Council districts have ALWAYS been the minority-majority districts in Dallas for several reasons related to continuing the White-Non-Hispanic majority on the Dallas City Council.  That majority was continued in the 2011 redistricting even though the Dallas White-Non-Hispanic voting age population was only 34%. Gerrymandering confuses voters, lessens voter turnout, lessens community contacts with council representatives, and makes campaigns for office expensive and more dependent on people with money, usually in North Dallas. 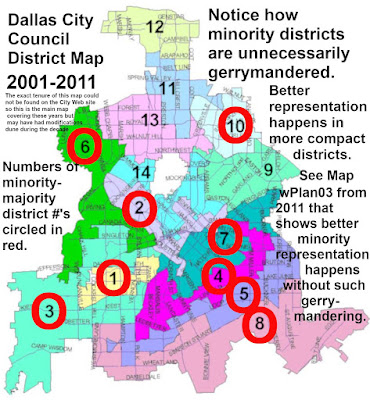 The 2001 map had 9 gerrymandered minority districts, circled in red above, where the gerrymandering was NOT needed to increase minority representation but to help keep a White majority on the Dallas City Council and/or help minority candidates to be dependent on North Dallas Money to run for office in the strangely shaped, expensive-to-run-in, districts.
For the first time in 2011 there was an intentional effort to lessen district gerrymandering. The 9 such districts in 2001 were reduced to 6 in 2011. These districts are circled in red in each map. That was progress, just not enough. 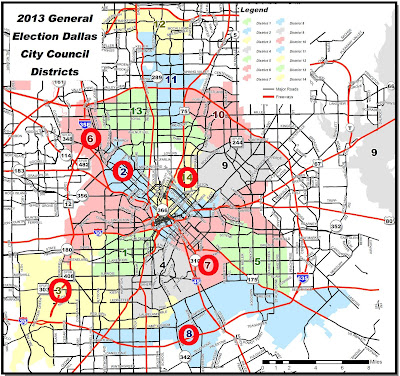 Below are the demographics for the above adopted 2011 map. Notice how White-Non-Hispanic population was able to dominate 43% of the districts numerically with only 34% of the Voting Age Population. Also, as the map clearly shows, 6 heavily and unnecessarily gerrymandered districts remain to fragment communities, lessening turnout, and making political campaigns more expensive, increasing the potential for a dependence on North Dallas Money. 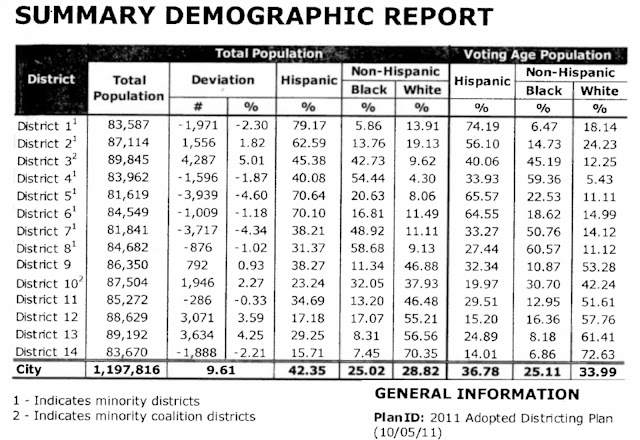 Below find the much more compact, much less gerrymandered map that would help gain minority representation on the Dallas City Council. It is the map that Mayor Rawlings supported in 2011, but it was not selected by the Council. 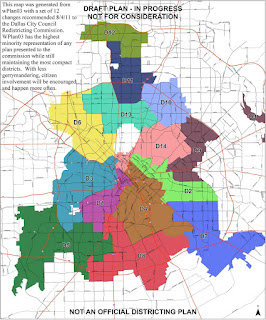 Below is the map of the 14 population centers with the 2010 Census that helped develop Rawling's Map with less gerrymandered districts.  The same steps must be taken once the 2020 Census data is available for the 2021 Redistricting Process. 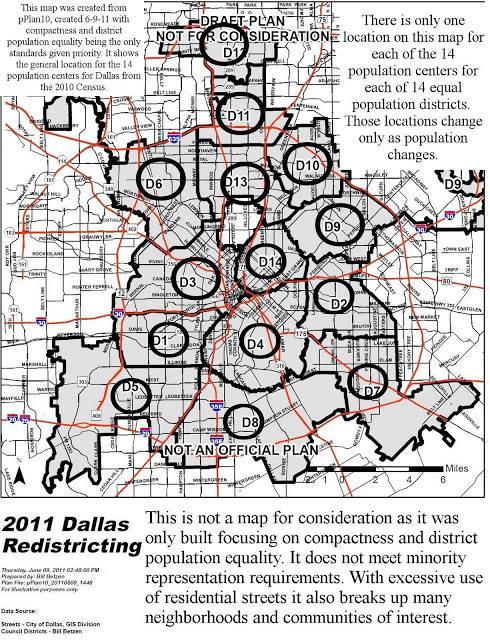 With the 14 population centers calculated from the 2020 census numbers Dallas will be able to redistrict so that the boundaries are compact, logical, minimize neighborhood fragmentation, and encourage voters to vote. We must minimize gerrymandered districts that fragment neighborhoods and require more funding for candidates to run a successful campaign.

The Mayor Rawlings Map in 2011 relied on using the Trinity River as a major boundary to create the two Pleasant Grove Districts.  As I recall this map never used less than a 6-lane major street as a boundary anywhere.  That helped lessen neighborhood fragmentation.

The more involved Dallas Citizens become the greater our city will become!
Posted by Bill Betzen at 9:56 AM