The significant role of slavery in the Texas Revolution along with the Tejas to Mexico underground railroad, were very well documented in 1/19/2019 presentations given at the African American Museum of Dallas by Dr. Marvin Dulaney, retired UTA History Professor, and Ms. Maria Esther Hammack. Ms Hammack is a graduate student working on her doctoral thesis. She spoke in detail of the documents she has found documenting the underground railroad for slaves escaping the South and Texas to go into Mexico where it was well known they could live free. 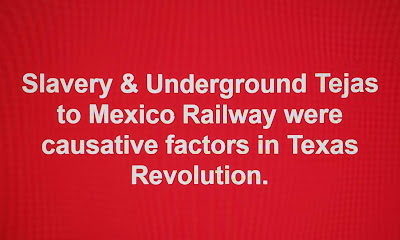 Ms.Hammack's documentation included several documents about two slaves who ran into Mexico to escape Sam Houston, who is documented as "purchasing" them for $2,100. She had a copy of his letter attempting to find a bounty hunter to track them down. She also had documents about the substantially successful and prominent life they enjoyed in Mexico.
There are currently several million Mexicans of African American descent living in Mexico. At least 2 Presidents of Mexico have been Black. Two af Sam Houston's slaves he valued greatly escaped into Mexico!
Both speakers told of the struggles to get these facts into Texas textbooks for students. The underground railroad hypothesis is the newest one and is being established with this doctoral dissertation which will be defended in the next month or 2. Her work is impressive!
It's a shame that the role of slavery in starting the Texas Revolution is not covered in our history books. Become a member of the African American Museum to support truth in history!
The presentations were video taped. Hopefully they will be available to be seen, possibly on the African American Museum of Dallas website. This was a very powerful day with a very engaged, active audience with many many questions.
Posted by Bill Betzen at 10:46 AM