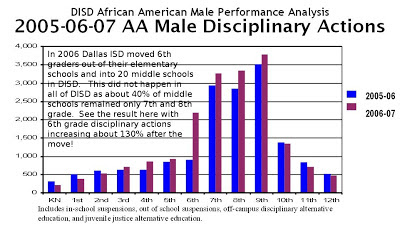 Click on the above chart to see the rest of the damage done in middle school! Remember, most of our dropouts never made it into the 10th grade until about 2011 when graduation rate progress pushed that 50% marker into 10th grade for DISD.

Tonight's meeting at Mark Twain was an excellent meeting.  Stephanie Elizalde presented a solid plan for changing Mark Twain into a Pk-5 TAG magnet. She spoke of 42% of the students leaving DISD for charters as being TAG qualified due to their documented abilities!

During the meeting STEM and STEAM alternatives were encouraged by the audience as well as encouraging a PK-8 alternative.  Carpenter Elementary nearby was presented as a future Pk-5 dual-language two-way magnet.  I recommend it become a Pk-8 due to the massive land that the school sits on with more than adequate space available for another building to accommodate the science and other facilities needed for a Pk-8 dual-language two-way school.

We will see what happens.
========== posting made before the meeting ===================
For the past 8 years I have been researching and studying everything I could locate on Pk-8 school performance compared to the fragmented configurations too common in US school districts.  It is no accident that the Finnish schools, which are considered some of the best in the World, do not have a fragmented configuration forcing their students into multiple, unnecessary school changes in a child's passage through to the University. They have one school through the 9th grade, one high school level, and then college.

If MarkTwain were to become Pk-8 it would lessen the need for travel away from the neighborhood for the middle school years.  It would also leave older siblings in a local school three years longer to help escort younger siblings to school and focus on their own academic goals.

Fortunately the Mark Twain campus is blessed by having ample space available.  Only a building for science lab and other such advanced study would be needed.

==== Research collected since 2012 regarding value of Pk-8 school configurations ======
Debates over grade configurations surrounding middle school have gone on for as long as middle schools have existed.  That issue is moving beyond the debate stage.

A July 2011 Harvard University study documented the damage being done in middle schools. Parents need to read it. This detailed and extensive research concluded (page 23): "Taken as a whole, these results suggest that structural school transitions lower student achievement but that middle schools in particular have adverse consequences for American students."  If parents agree, they must demand change, especially here in Dallas due to the publicly acknowledged issues with our DISD middle schools.

The Harvard study showed that in virtually all subjects the scores on standardized test were lower in middle schools than in K-8 elementary schools. Parents and teachers familiar with both settings will rarely be surprised by these findings.

This past November a powerful editorial was published by CNN giving a simple message: "By all accounts, middle schools are a weak link in the chain of public education."

The K-8 response to this "weak link" is gaining momentum. The number of  K-8 schools has almost doubled in the US since 2000 while over 1,000 middle schools have disappeared or been re-purposed as K-8. Google news for K-8 and middle school.  You will find reports of school districts closing middle schools and changing them to K-8 elementary schools with very few exceptions. The reason is as simple as the statement a decade ago by William Moloney, then the Education Commissioner of Colorado: "K-8s are the place where everybody knows your name."

What better place to endure the uncertainties of the changes of puberty?

This past April the National Middle School Association changed it's name to the Association for Middle Level Education. They saw middle schools being closed in the US, and realized such separate institutions do not exist in the highest achieving school systems in the world, such as Finland.  In such countries the elimination of the middle school transfer trauma appears to help in far exceeding US academic achievement while at the same time investing significantly fewer classroom hours. The name change reflected a more authentic focus on educating students ages 10 to 15. Will Texas public schools see what is happening?

In Cincinnati Ohio the change to K-8 schools happened in the 1990's. It was a positive change. Now Cincinnati wants more improvement and is exploring a K-6, 7-12 configuration.  They are finding better initial results. The jury is still out and questions remain. See this 12-26-11 news report on explorations all school districts should be making.

We must continue to study the growing research. Google "middle school," "K-8," "7-12," "research," and related search combinations, to find such research.  Below is a chronological listing of relevant articles, a list that will continue to grow:


The rest of the story on the chart above is the terrible 440% increase in discipline problems from 5th graders to 6th graders the first semester of 2012/13 school year in Dallas.  See the following chart.  It is accurate but still being ignored by DISD!
It is from http://schoolarchiveproject.blogspot.com/2013/03/middle-school-chaos.html 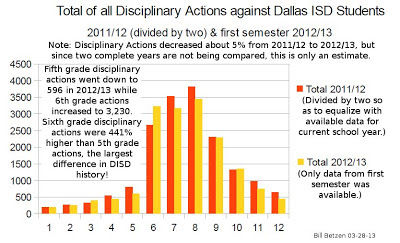 Below is a erratic listing of articles, gathered as time is available, about school districts now in the process of moving to a K-8 configured system:

If anyone knows of any research that indicates K-8 schools have a negative affect on discipline or student achievement compared to K-5/6-8 or K-6/7-8 configuration, please email the links to me at bbetzen@aol.com and describe what you found.  Thank you.