On 8-16-18 the Dallas ISD Board of Trustees approved bringing a tax ratification election (TRE) to voters on November 6, 2018 that, if approved, would fund strategic initiatives that support students.  If approved by voters in November, the 13 cent addition to property taxes with the TRE would provide an additional almost $126 million every year to support early learning, racial equity, Schools of Choice, and strategic compensation.

Dallas ISD has set up a their main information page at https://www.dallasisd.org/tre .

Misleading information is being circulated online that must be corrected with documented facts linked to online sources.  Well explained corrections to the following are welcome, but only if documented with links to reliable data.
1) It is being alleged that any benefit from the TRE will be gone by the end of year 3 of the 5 year budget.  That is false.  The income will slowly decrease but will average $126 million the first 5 years, with annual benefits continuing into the future and never disappearing.

Here is the $1.04 income projection for 5 years with funds inserted from the $1.17 income projection spreadsheet provided on page 18 of the presentation that Dallas ISD used in all 4 of their public meetings on the TRE ran by Dr. Hinojosa. These were done in July and were updated two months later with even more positive numbers.

The first chart dominated with yellow inserts is a projection by DISD for income if the $1.04 income continues.  The additional data from the $1.17 income projection is inserted in yellow to illustrate the changes.  The non-numbered lines are a projection of the increased income from State Revenue that will be received from the two "Golden Pennies" that will be authorized by the TRE.  The blue tinted lines show that specific increased State Revenue which is included in the line 13 total income tabulation. 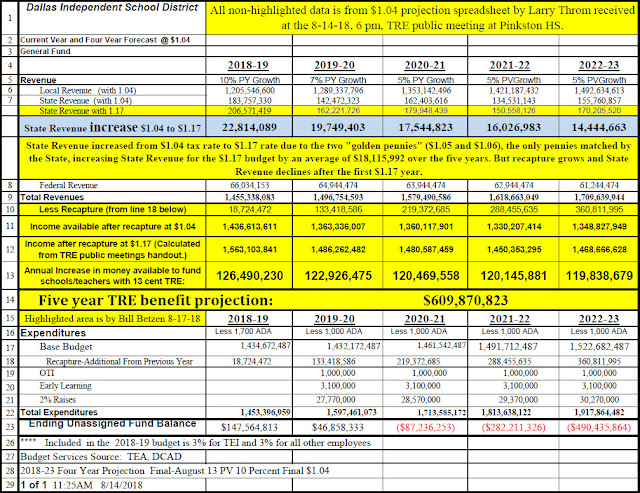 Please note in line 13 above the additional income that will be generated annually if the $1.17 tax rate becomes law. The five year total in additional spendable income, after recapture was subtracted, is projected to be $609,870,823.  Of this amount, it is projected that about $90 million will come from the increase in State funding generated by the two "Golden Pennies" that will generate those funds, the $1.05 and $1.06 pennies.
Below is page 18 from the presentation given at all four of the DISD meetings over the last two weeks, and now on the TRE page maintained by DISD.  This chart is the funding over the next 5 years if the TRE is approved by voters: