This morning, 7-8-18, on Texas Politics on Channel 8, Dr. Lew Blackburn stated wrongly that DISD would ultimately lose money from proposed DISD 13 cent taxation increase.  This was his statement:


“As far as the extra money that we receive from the increase in taxes: The first year we will end up with about $92 million extra.  The second year of the extra amount of tax dollars we are going to get we end up with about $20 million left over. The third year we are actually in the negative around about $43 million. So if you look at the amount of extra money we are going to get because of the 13 cent increase, on the third year we actually start to lose money.”

The above errors come from a DISD-made spreadsheet given to the trustees, copied below. It was used to provide the numbers that Dr. Blackburn quoted this morning.

Sadly, this DISD spreadsheet fails to specifically distinguish the recapture that will be happening ONLY due to the 13 cent taxation increase. It gives current taxation recapture (line 7 under the $1.04 column only in chart at bottom of page below) and it gives recapture from BOTH, including the 13 cent increase, with the current proposed $1.17 taxation (line 7 in the $1.17 column).

The problem is when the DISD spreadsheet NEVER does the simple subtraction of the figure in line 7 under the $1.04 column from the figure in line 7 under the $1.17 column.  That simple subtraction is needed to identify the recapture that will be required ONLY by the 13 cent increase (line 13 in chart at bottom of page below.) Without that distinction it is easy to focus on the "Extra Revenue Less Recapture" row (Row 8 in the last spreadsheet below) and make the error of thinking that all of the TRE 13 cent tax increase will be erased by recapture by the third year.  That is not true!

Each of the next 5 years an average of $119,000,000 ($119 million) new dollars will remain (see lines 12 & 14 in spreadsheet at bottom of this page) from the money generated by the 13 cent tax increase each year after recapture is paid!  (This projected income was increased to $126 million for the handout in the 8-9-18 Briefing Agenda attachments on this topic.)

(Click on the above image of DISD provided spreadsheet to see full chart, or go to the right.)

Line 11 is the amount of income that will be generated by both tax rates after the additional recapture generated is removed.

In the original spreadsheet DISD used the entire DISD recapture amount to calculate the "Extra Rev. Less Recapture" row and never singled out the recapture ONLY coming from the 13 cent tax increase.  That manipulative calculation leaves too many people with the false impression the income generated by the new 13 cent tax increase will ALL be recaptured by the third year and become a negative number. That is wrong! Yes, that does happen to the entire DISD budget, but the 13 cent tax will help lessen the damage significantly!

Recapture will grow every year with or without the 13 cent tax increase! Those numbers were not pointed out in the DISD spreadsheet, but they are in line 8 of the spreadsheet below, under the column for $1.04.

Spendable income remains for DISD children every year with the 13 cent tax increase!

I am glad to share the original Excel spreadsheet that produced this chart below, dated 7-28-18. If you want a copy, send an email at bbetzen@aol.com requesting such and it will be emailed to you. It is a very good idea for people to double check this spreadsheet for accuracy. 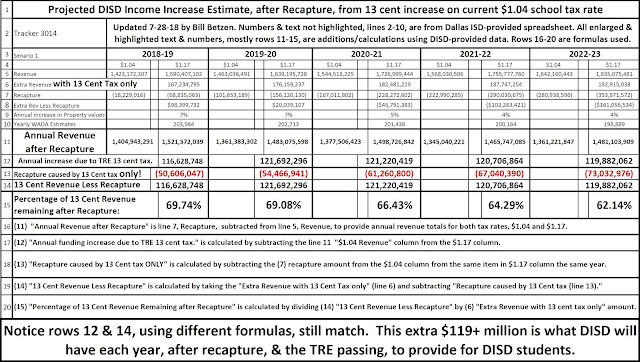 I strongly support the passage of the 13 cent TRE, but only if one working Excel School Equity Spreadsheet is released for each year for the past decade, and from this year forward, for use by parents, child advocates, and the general public in exploring alternatives available in DISD, the progress in DISD, and identifying issues that need to be resolved.  See details about this increase in DISD transparency at:   http://billbetzen.blogspot.com/2018/04/dallas-isd-tax-increase-demands.html.
Posted by Bill Betzen at 9:57 AM