I started posting online about academic progress in Dallas ISD ten years ago, in April of 2008.  One of my first posts was this one: http://schoolarchiveproject.blogspot.com/2008/04/dropout-counting-in-news.html

Sadly, that posting made the point that Dallas ISD had the highest dropout rate of any city over a million population in the nation.  We started at the bottom, but by that time the Time Capsule Project was in its third year and the data was looking good.  Students were staying in school.  Enrollment in high school was going up.  A posting was written in June 2008 projecting that by 2010 we would have a graduation rate at Sunset as high as 50%, which would be an all time record.  See http://schoolarchiveproject.blogspot.com/2008/06/there-is-very-good-reason-to-believe.html

That 2010 goal was achieved with 10 percentage points to spare! 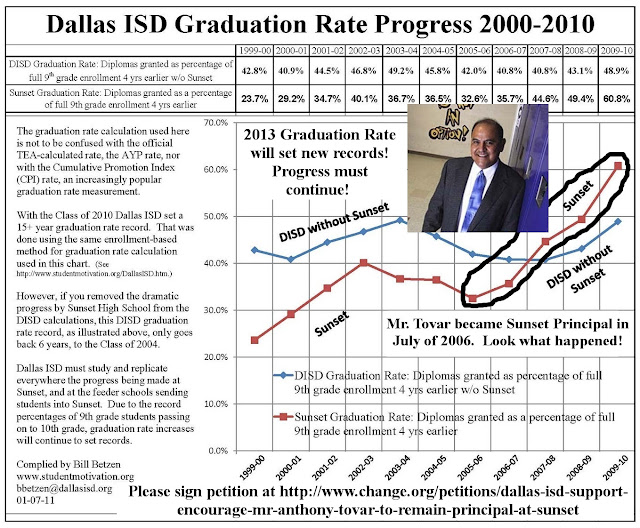 The progress continued at Sunset and at the middle schools with active Time Capsule Projects.

By 2017 there were 6 active Time Capsule Project Middle Schools who had actively written letters for 4 or more years. Of those 6, 4 were among the highest SEI scoring middle schools among all 33 DISD middle schools. All five of the best middle schools were south of I-30.  See http://schoolarchiveproject.blogspot.com/2017/11/school-time-capsule-project-update-11-6.html