2-28-19 Testimony: Conflict of interest on Dallas ISD Board

The Dallas ISD Board meeting this Thursday at 6:00 pm will cover increasingly critical items. I am signed up to address items: 6.01 and 7.03 on the current agenda.

Concerns about 6.01 will address conflicts of interest that continue to this day of board members with documented interests in and work with charter schools. Here is the online listing today for the International Leadership of Texas (ILT) Board on which DISD Board President Edwin Flores sits. 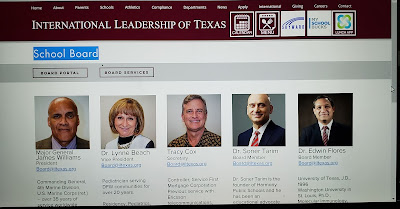 International Leadership of Texas (ILT) is not physically inside DISD, but there is little doubt it is serving children from inside DISD, and/or children from outside DISD who could easily attend DISD schools in the current open-enrollment atmosphere.  There is no documentation in the Dallas ISD Board Conflict of Interest files for Mr. Flores, or for any trustees, to show that such conflicts have been documented.

Due to today's very misleading Dallas Morning News Editorial I must focus the errors DISD is spreading to the public that are reflected in this editorial.

The TEI system is focusing teacher raises on the highest White enrollment schools and on the schools serving the lowest percentage of children from families of poverty.

A study was done this past November using data from an open records release covering the average teacher salaries in each DISD school over the past three years. The data showed a $423 difference in 2015 between the 20 schools with less than 70% poverty and the 216 schools with over 70% poverty. Over the next three years under TEI that difference exploded to $3,953! This also contradicts today's Dallas Morning News editorial. Significant corrections are needed to TEI!

See the data at http://billbetzen.blogspot.com/2018/11/dallas-isd-teacher-excellence.html
Using data on teacher salaries found in the most recent Texas Academic Performance Reports tells the story of the Dallas ISD Teacher Effectiveness Initiative (TEI) giving raises to teachers of the most White schools which do not have the highest School Effectiveness Indices scores! This contradicts the Morning News Editorial! See http://billbetzen.blogspot.com/2019/02/higher-dallas-isd-teacher-salaries-are.html?m=1

The most consistent issue driving all these problems is an ongoing lack of transparency within DISD.

About two years ago there was active trustee discussion during board meetings about having a report made on the students trasferring during the school year into Dallas ISD from charter schools.  They wanted a report to be made on these students as to achievement status and the schools they were transferring from.  Then a person sitting on a charter board became DISD Board President and these discussions were never repeated nor were any such reports made public.  Where are these reports?

Other transparency discussions and proposals given to the board include expanding the School Information Files, now online at the DISD Data Portal.  The proposal made was to add about 200 additional variables for each school to these initial 40 variables given for each of the 266 schools and academies.  This data is now available in a 40 item spreadsheet with each of the 266 schools and academies being one row in the spreadsheet.

Lack of data transparency underlines the hypocrisy of Dallas ISD in claiming to be working toward racial equity.  What is DISD hiding?

Where can we go to verify that all DISD schools are being funded equitably with one simple look at the data and without having to spend hours collecting data from multiple sources?